Back to In Action / Thien Nguyen, Student

Thien Nguyen was introduced to engineering through his middle-school’s Oregon MESA program. This early experience in Invention Education led to a full scholarship to Northeastern University, and working post-graduation for Spotify as a software engineer.

He was born in Vietnam and lived there until fourth grade, when his family immigrated to the United States. At the time Thien spoke no English, yet as he adjusted to his new surroundings in Portland, Oregon, he quickly discovered that he was fluent in another language — math.

By the time Thien was a student at Portland’s Ockley Green Middle School, he had evolved into a STEM superstar. A teacher who had noticed Thien’s knack for numbers persuaded him and his brother to join the school’s Oregon MESA (Mathematics, Engineering, and Science Achievement) program, part of a nationwide consortium of academic development programs.

MESA marked a turning point for Thien. Through the program’s Invention Education curriculum, he found endless opportunities to learn and build in ways that sparked both his creativity and his curiosity. He also took home prizes in many of MESA’s top competitions.

Thien graduated from high school with honors and was awarded a full scholarship to Northeastern University. After graduating in 2019 with a degree in computer science, Thien’s trajectory took him to the offices of the music streaming service, Spotify, where he’s now employed as a software engineer. 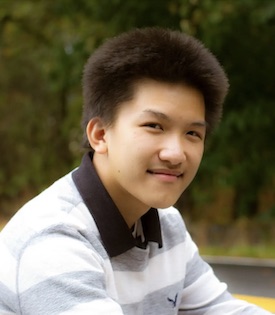 Through MESA’s Invention Education curriculum, Thien found endless opportunities to learn and build in ways that sparked both his creativity and his curiosity. He also took home prizes in many of MESA’s top competitions

Be humble and be kind. And be determined — never give up. Eventually you see the light at the end of the tunnel.

When you moved to Oregon, you were new not only to your school but also the country. What made you decide to join MESA?

My teacher, Mrs. Romero, told me about MESA. She mentioned, ‘Hey, you like math and science, you should try this after-school program.’ So my brother and I decided to start going, and I remember they did some really cool demonstrations. I thought, ‘Oh, this is cool. I like building things. I like breaking things!’ Seeing kids have those hands-on experiences really triggered my interests.

Describe your relationship with MESA.

I really enjoyed it. It was an after-school program but also like a hobby. We’d plan on staying for an hour but sometimes we’d spend three or four hours every day. Mrs. Romero would sometimes have to say, ‘You guys gotta go home.’

But we were super into it. We had our team and we were very dedicated, and it paid off in the end. We built a trebuchet and won first place at the USA MESA National competition, and the following year we won second place for a windmill we designed. Even when we didn’t win first place, it was still good. It’s that whole invention journey. MESA really built a foundation for my curiosity and thirst for knowledge. That whole experience propelled me to the next level, and I carried that curiosity into college.

How did that early experience with invention influence your decision to continue with STEM in college?

I think it kind of started out with the teachers and volunteers — these adults giving us kids the space and extra hours we need and letting us be inventive, and then their guidance and asking the hard questions, which gave us a different perspective than what is normally taught in middle school. Like teaching us how to be better writers, how to write technical papers, and how to present at a science fair, even strategy and how to lead a team, collaborate, and manage a project.

Tell us about your stint as a MESA intern.

After middle school, I went to Lincoln High School, which unfortunately didn’t have a MESA program or anything similar. But since Lincoln was super close to Portland State — which is where the Oregon MESA office is — I was like, ‘Hey, I’m actually just a couple blocks away, I can just help them out here and there.’ So I asked if I could work there and they asked me if I wanted to be an intern. I created an opportunity for myself that allowed me to get more experience and grow my skill sets, and also give back to MESA at the same time.

What skill sets do you think are important for a job that’s involved with innovation like your job right now at Spotify?

There’s always the requirement to be competent in whatever the technical aspects are of the job. But that is not enough because there are so many others who are competent or even very good. So, to me, the way to stand out is to have interpersonal skills and a diverse perspective. Those things help to get in the door. But once in, I think what really helped me to be more creative and inventive was deliberately finding time and space to really think, and bring up ideas with others and be collaborative. We have to collaborate doing those projects, dividing up the work and moving toward a common goal.

How would you describe your mindset as an inventor?

It’s about being super open — being open to learn, being open to see people in a different perspective. And being unafraid to fail. Even when there’s a constraint, I never think, ‘I can’t do this.’ I’m like, ‘Okay, this is a constraint. This is what we can’t do. How can we make it fit into the boundary, or can we push the boundary a little bit more even though maybe it’s not the traditional way of doing it?’ It’s cliché but it’s thinking outside the box.

What are some of the most valuable lessons that you’ve learned along the way to where you are now?

Be humble and be kind. And be determined — never give up. Eventually you see the light at the end of the tunnel. At our company we like to say that the only constant is change. So just keep moving and be prepared for things to change. There might be an opportunity that comes your way. 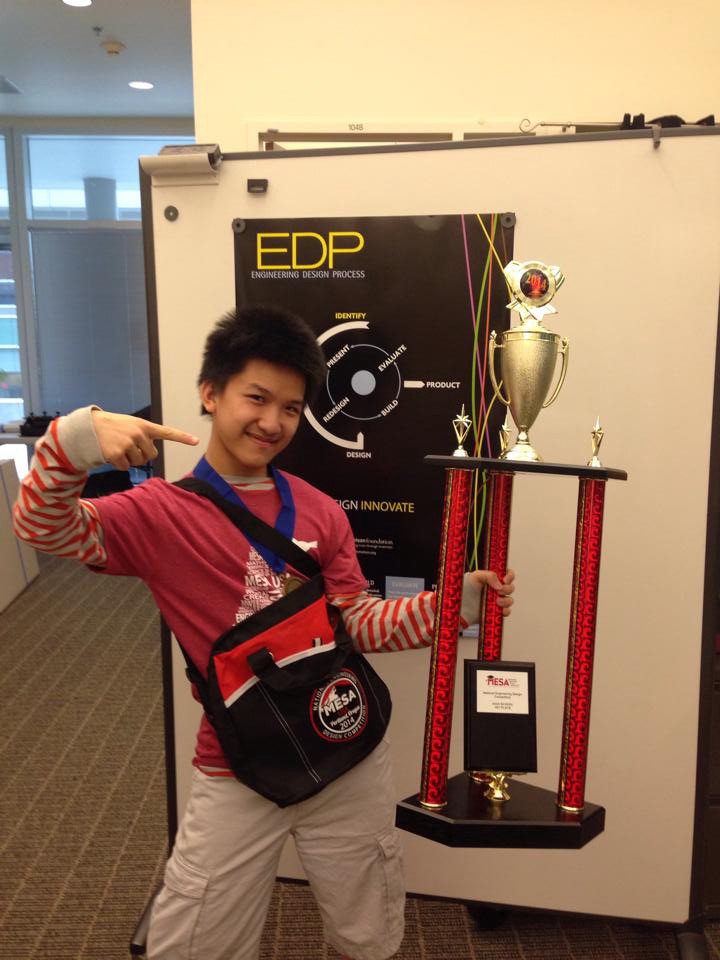 Through MESA’s Invention Education curriculum, Thien found endless opportunities to learn and build in ways that sparked both his creativity and his curiosity. He also took home prizes in many of MESA’s top competitions.

What about those days when you encounter failure, or it feels like nothing is working the way you planned?

It’s okay to not be okay. It’s okay to fall down and lay down for a bit. I actually learned that when I was studying abroad in Sweden. Resting changes my whole mindset. Working without sleep or a break is actually not a great way of doing things. And in Sweden, there’s something called fika. You take a coffee break, like in the morning at brunch. And after lunch, like between two and three, you take a break and then dinner and then take a break. After that experience, I went back to the States and actually slept more and got better grades. So that’s also important to keep in mind: work hard, but take breaks — that will get you further than just pushing through.

Where do you see yourself in 10 years? What difference do you hope to be making in the world?

That’s a question I’ve been asking myself. There’s a couple of paths I’ve been pondering. Maybe somewhere in the Navy, because I love learning and traveling and I could also serve the country. Another route is to be an entrepreneur and create a startup and even fail, because I would learn a ton. And I don’t know why, but I also want to have a farm. But hopefully, whatever I do, I would like ultimately to have a foundation that focuses on academia or education to help kids who need a boost in life that can propel them into the future.